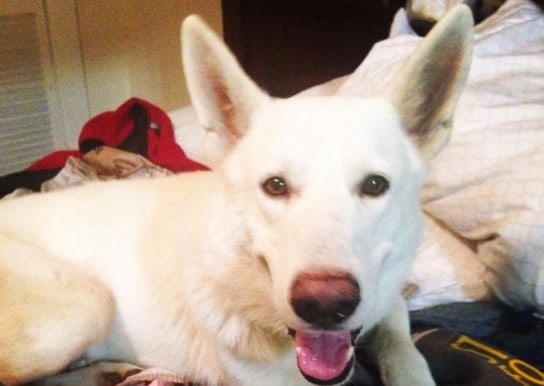 Try as you might to find that perfect dog, sometimes the perfect dog finds you instead.

When Rachel Kauffman agreed to foster Hank, a white German Shepherd for a few days until his long-term foster was available to take him, she already had two dogs of her own and another foster pup, with no plans of adding more to her four-legged family.

Hank, however, had other plans.

After six days with Rachel, Hank was moved to a long-term foster to be treated for heartworms and to get healthy before being formally adopted to a family in Tennessee.

“When you get a new dog, they imprint pretty quickly. He would follow me around a lot, watch what I was doing,” Kauffman, a vet tech, explained to Commercial Appeal. “I knew we had a good bond, but at that point, I couldn’t predict he would do what he did.”

Hanks new foster family safely locked him inside the home while they stepped out for a bit. When they returned, Hank was nowhere to be found.

Hank had figured out how to unlock and open the door. He had escaped.

The search for Hank began, with sightings of him reported over the next two days, though no one was able to successfully catch the elusive shepherd.

That was, until Tuesday morning, when Nicole Douglas spotted Hank just a few blocks from his former foster’s home. Douglas followed closely behind Hank as he trotted down the street, made a couple of turns, and plopped down right on Kauffman’s front porch!

In all, Hank traveled 11 miles over 2 days to get back to the home where he’d only spent 6 days.