Two Florida families are devastated after their beloved dogs died while in the care of South Tampa boarding facility, Lucky Dog Daycare. But, in the aftermath, employees began speaking out, exposing some serious problems at the popular pet resort. 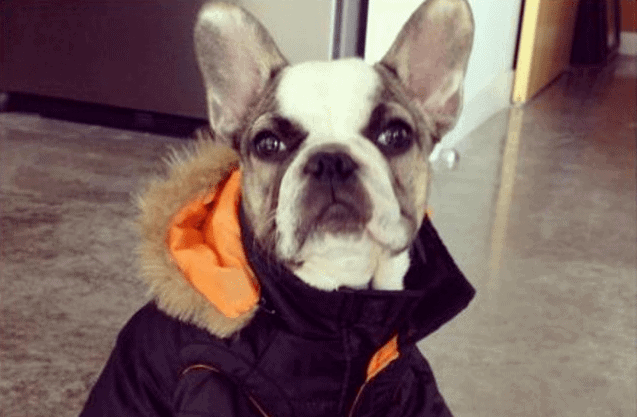 Porscia’s family thought she would get the best love and care, in a safe environment, during her stay at Lucky Dog Daycare.

Vacationing with her family over the Fourth of July holiday, Mia Norton entrusted her dog Porscia, a 4-year old French Bulldog, in the care of Lucky Dog Daycare and Pet Resort, a top-rated dog boarding facility in South Tampa.

On Saturday, she got the call that all dog owners dread. Her beloved dog was dead. One of Lucky Dog’s owners, Jack Hamilton gave her the horrific news that Porscia had died of heatstroke.

“He said she died of heat stroke,” Norton told WFTS. “We live in Florida, you know, how does a dog die of heat stroke? Why was she out there so long? We had so many questions.”

Quick to defend his business, Hamilton told reporters that his employees had been given strict instructions to limit outdoor play to mornings when outside temperatures were cooler. He said that they’d been ordered to begin bringing all dogs inside by 11:00am.

According to Hamilton, employees working on Saturday did not follow protocol, resulting in Porscia’s death. Two weeks prior to Porscia’s death, another dog died due to heatstroke at the facility. Hamilton insists a special meeting was held after that death to reiterate to all employees the policy of bringing all dogs inside before the afternoon Florida heat.

“What protocols? What is being done? What could have been done? If I had known another dog died there there is no way I would’ve put my dog in there,” Norton said. “Why did no one see my dog? If a dog is panting is anyone seeing her? Are there too many dogs? Are there not enough people? They told me one person was there, one person for how many dogs? 40-50 dogs? You can’t do that.”

When news of the dogs’ deaths became public, Lucky Dog took to social media to defend their operations – and to place blame firmly on their employees. 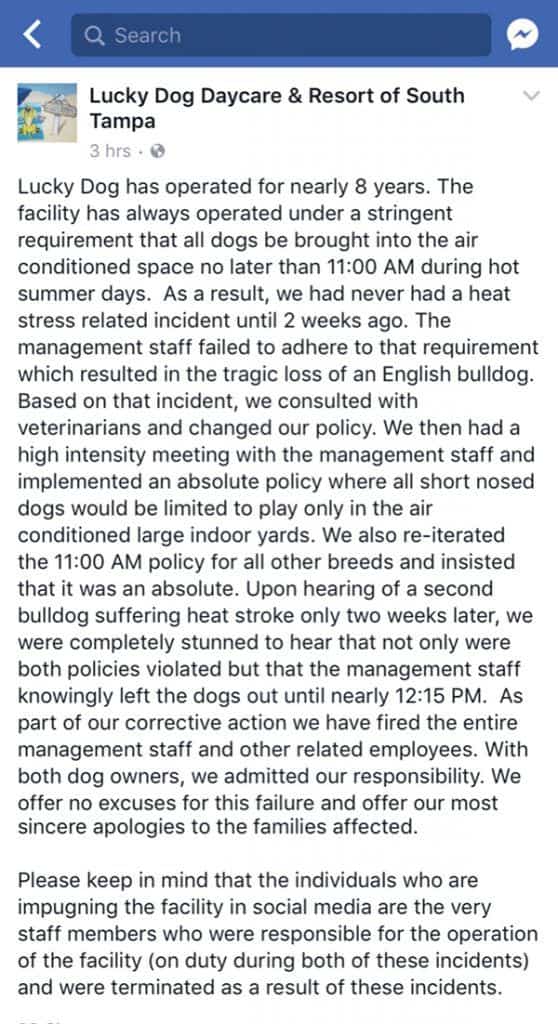 Following that Facebook post, several former employees began speaking out, exposing serious problems at the facility that many say, should be shut down for several reasons.

Employees assert that Lucky Dog Daycare didn’t fire the “entire management staff and related employees” as stated in their post. In fact, they say a general manager, assistant manager, and trainer were the only employees fired in a barrage of cursing and swearing after Porscia’s death – and that those employees were offered their jobs back in the the parking lot on their way out.

As for any other employees Lucky Dog claims to have fired, former employees – 32 of them – were not fired, but quit as a result of the incident and the owners’ handling of it, among other complaints about the operations and conditions at the facility.

Not one employee has gone on record to confirm any policy of either keeping brachycephalic breeds indoors on hot days OR bringing all dogs inside from the play yard by 11:00am. Several stepped forward to say this policy was never put in place or communicated to employees. One employee said that, on the contrary, they had to beg the owners to allow them to bring the dogs inside on hot days.

Further complaints about the facility included:

-Serious understaffing, in some cases leaving one employee in charge of 40 to 50 dogs at a time by themselves

-Lack of training for staff – According to one former employee, the owner said “it doesn’t take a genius to watch dogs”

-A rat infestation that owners were well-aware of and refused to remedy (complaints included live rats visible in all areas of the facility, rat feces on floors and desks, rats drowning in the sink where dishes were washed/stored)

-A number of additional dog deaths dating back at least two years, including and English bulldog and a Boxer that died as a result of heatstroke, and countless unreported injuries as a result of fighting.

You can view the entire thread here. The post has since been deleted from Lucky Dog Daycare’s Facebook page.

The events at Lucky Dog Daycare, along with similar incidents at dog boarding facilities both in the area and nationally draw attention to a serious lack of oversight and regulation regarding these facilities.

Very few states in the country have laws in place to regulate operations at dog daycare businesses, including a mandated dog-to-employee ratio. And, even in cases where an animal is killed or injured as a result of negligence, dog owners very rarely find justice for their beloved pets.

Several such dog owners, led by Elke Griffin whose dog, Blue, was killed while boarding at another facility, are petitioning for stronger protection for animals left in the care of dog daycares and boarding facilities when negligence leads to serious injury or death. They’re hoping the petition results in the passing of legislation they’re calling “The Rainbow Bridge Bill.” Click here to sign the petition.

Like the other beloved dogs that die tragically in the hands of negligent dog boarding facilities, Porscia’s death was avoidable and preventable.