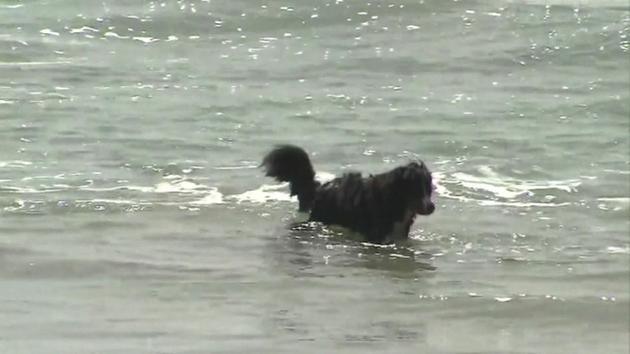 It wasn’t a lifeguard that came to the rescue when two swimmers at a Ventura, California beach were caught in the dangerous current, but a great, big, fluffy Bernese Mountain Dog!

When a boogie-boarder was caught in the riptide, it was Nico, a 3-year old Bernese Mountain Dog, who, acting on instinct alone, saw the woman in distress and rushed into the water to help. Nico’s owner yelled from the shore for the struggling boogie-boarder to just grab onto Nico wherever she could and let him pull her in.

With one arm around Nico’s belly and another on her board, the strong four-legged hero pulled her safely to shore.

Then, Nico returned to rescue the woman’s husband, who had become caught in the same riptide while attempting to rescue his wife.

“The woman and the gentleman they were just exhausted. They just looked and said, ‘Is that, like, a trained life-saving dog?'” Clarke told WRIC.

In fact, it was the first time Nico’s owners had ever seen him to anything like that! A natural rescuer, his instincts just kicked in and he knew exactly what to do.