The AKC® Humane Fund announced today the winners of the 15th annual AKC Humane Fund Awards for Canine Excellence (ACE). These awards honor five inspirational dogs that have made significant contributions to their communities and truly exemplify the power of the human-canine bond. One award is presented in each of the following five categories: Exemplary Companion, Uniformed Service K-9, Search and Rescue, Service and Therapy dog. This year’s winners include a faithful companion that saved her owner from a bear, a heroic K-9 that took a bullet in the line of duty, an international search and rescue traveler, a blind therapy dog bringing comfort to abused children and ACE’s first mixed breed winner, a service dog to a U.S. veteran raising awareness of the profound impact service dogs can have on trauma survivors.

“Dogs impact our lives every day in immeasurable ways, and with so many wonderful ACE nomination stories, it’s a difficult choice to select only one recipient in each category,” said AKC Spokesperson Gina DiNardo. “These five dogs have gone above and beyond, touching the lives of individuals and communities across the country. We’re thrilled to recognize their achievements with an ACE award.”

All of the ACE recipients will receive $1,000 to be awarded to a pet-related charity of their choice, a one year pet insurance policy from Pet Partners, Inc. and an engraved sterling silver medallion to be presented at the AKC/Eukanuba National Championship in Orlando, Florida on December 13, 2014.

This year’s ACE winners include:

Exemplary Companion Dog: “Boomer,” an Australian Shepherd owned by Connie Dilts of Smicksburg, Pennsylvania
It was like any other day when Connie Dilts embarked on her usual walk with her two Australian Shepherds, Boomer and Reina, except on this day Boomer would save her life. On a remote road one mile from home, a bear charged at and violently attacked Connie. It wasn’t long until Boomer was upon the bear, keeping him away from Connie and ultimately forcing the bear to flee. To be safe, Boomer chased the bear to ensure it didn’t return. Boomer returned some time later, the only battle scar a scrape on her nose.

Therapy Dog: “Xander,” a Pug owned by Rodney and Marcie Beedy of Klamath Falls, Oregon
Xander the Pug had a tough start to life – he lost both of his eyes following an accident and was put up for adoption soon after. But when the Beedy family met Xander, they saw something special in him and knew he could improve the lives of others. The Beedys’ new dog Xander soon passed his AKC Canine Good Citizen test and became a certified therapy dog, visiting hospitals, nursing homes, schools and abused children. Even without sight, Xander has an extraordinary ability to sense humans in need. His gentle, calm demeanor has provided unmatched comfort for so many. 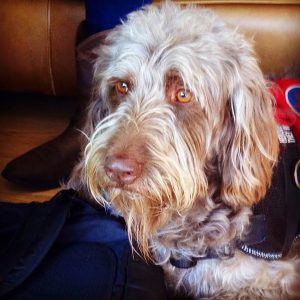 Service Dog: “Gander,” a mixed-breed dog owned by Lon Hodge of Vernon Hills, Illinois
Gander was on doggy death row when a prison training program saved his life. After graduation, Gander received additional training and became a service dog to veteran Lon Hodge, who suffers from PTSD and mobility issues as a result of his time in the service. Lon credits Gander with saving his life, and now the duo spend their time raising awareness of veterans’ issues and the profound impact service dogs can have on trauma survivors. Gander is the first mixed-breed dog to win the ACE. 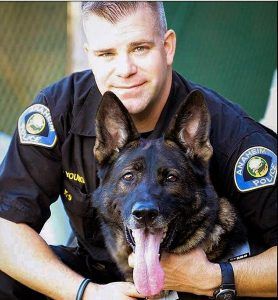 Uniformed Service K-9: K-9 “Bruno,” a German Shepherd Dog owned by Officer R.J. Young of the Anaheim Police Department in Anaheim, California
K-9 Officer Bruno spent his career sniffing out narcotics and criminals and protecting his human colleagues. But earlier this year, Bruno’s dedication was put to the test like never before. After locating a suspect who had allegedly opened fire on probation officers, Bruno was shot in the face in the line of duty. The round shattered his jaw, damaged his lung, and lodged itself less than an inch from his heart. Bruno, now retired, continues to heal and live a comfortable life at home with Officer Young and his family.

Search and Rescue Dog: K-9 “Patella,” a Labrador Retriever owned by Jim Houck of Ft. Collins, Colorado
K-9 Officer Patella is certified as a Human Remains Detection K-9 and has assisted countless cases across Colorado. Last year, Patella and her handler Jim Houck responded to an international call, travelling 9,000 miles to the Philippines to lead recovery efforts after the destruction of Typhoon Haiyan. Patella worked a total of 60 days in intense heat and humidity, searching miles of debris that were as deep as 20 feet and providing closure to hundreds of families.