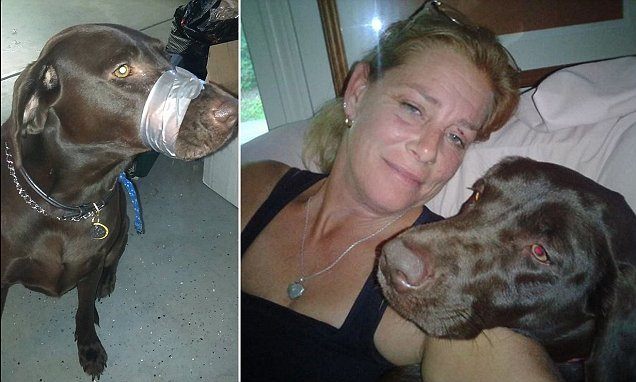 A woman who posted a picture of her chocolate lab-mix with its mouth taped shut on her social media page, which was labeled with a South Daytona, Florida location has now been charged in Cary where she was staying with the dog. Katharine F. Lemansky, 45, whose Facebook page lists her name as Katie Brown, is charged with one count of Class 1 Misdemeanor Cruelty to Animals after admitting that the incident took place in Cary. The charge carries a fine and possibly up to 150 days in jail. Lemansky must appear in Wake County court December 14, 2015. No additional charges are pending.

“Taping the dog’s muzzle shut was a terrible decision on Ms. Lemansky’s part, and charging her with animal cruelty under North Carolina law was the right thing to do,” said Cary Police Captain Randall Rhyne. “At the same time, it’s important to also note that our animal control officers who physically examined both Brown and her littermate found the dogs to be very well cared for, which is why we did not and could not remove them from the owner. The dogs are current on their shots, spayed, and microchipped. They are clean and well-nourished and appear to be comfortable in their surroundings. And there were no signs of injury to Brown’s muzzle, not even detectable hair loss.”

Town of Cary Police worked with law enforcement officials across two states to determine jurisdiction and to pursue a quick resolution to the situation that had prompted public outcry and messages to local officials from thousands of people across the globe. Cary Police sent Animal Control officers to investigate Lemansky within an hour of being contacted by South Daytona Beach law enforcement regarding the disturbing photo and the possibility that Lemansky was in North Carolina. The City of South Daytona reportedly received confirmation from Lemansky’s family members that she had not lived in South Daytona Beach for about 1.5 years and contacted Avon, Connecticut police who also stated that Lemansky no longer lived in that location. She was then tracked to Churchview Street in Cary where she was located and charged. The dog’s photo was posted on Facebook Friday, November 27.

As always, anyone with information is encouraged to contact the Town of Cary Police Department at (919) 469-4012 or Cary Crime Stoppers at (919) 460-4636. Crime Stoppers pays up to $2,500 for information leading to the arrest or indictment of those responsible for committing certain types of crimes. All calls will be kept CONFIDENTIAL at caller’s request.