A PetSmart groomer was fired after a store customer noticed her mishandling a dog during a grooming session and recorded the incident on her cellphone. 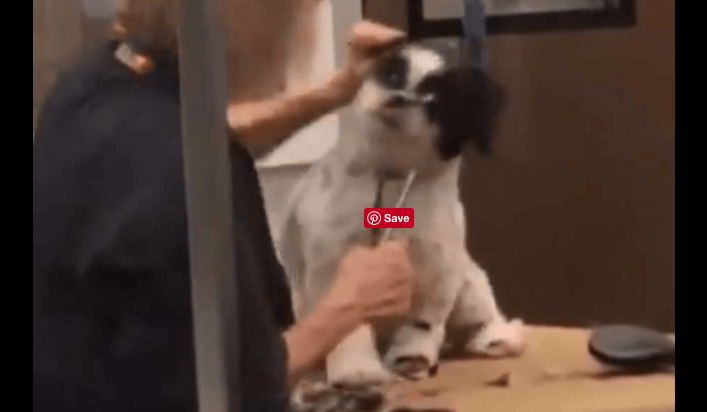 When Brooke Vowers picked up her dog after she was groomed at a Katy, Texas PetSmart store Thursday, a store customer stopped her on her way out of the salon. Vowers said the woman that stopped her said she’d been waiting outside the salon for over an hour hoping to find the owner of the dog that she’d watched being violently mishandled during a haircut.

The woman showed video of the incident to Vowers who then posted it to Facebook where it quickly went viral.

“Just took my dog to get groomed and as I’m walking out this lady comes up to me and said she’s been waiting for an hour to see who’s dog this was because of how mean the groomer was to her,” Vowers posted.

Just a few seconds into the 19-second video clip, the groomer is seen forcefully jerking the dog’s head back before grabbing her by the ear. After watching the video, Vowers was understandably angry and upset over the treatment of her dog.

WARNING: This video may be difficult to watch.

The customer that recorded the incident had already contacted PetSmart’s corporate offices to report the incident. Vowers took the video to Store manager Ed Smiers who immediately terminated the employee.

“We don’t condone that kind of behavior and we’ve already terminated the associate,” Smiers told Chron.com Friday morning. Smiers said the store is also conducting an internal investigation into the dog’s treatment and reviewing the behavior of other groomers employed there.

PetSmart grooming salons around the country are no strangers to injury and death of dogs in their care. In December, two dogs died and a third was injured following separate grooming appointments at the same New Jersey store. And, last year, a Chihuahua died following a simple nail trim procedure at a California store, a Dachshund was strangled to death only minutes after arriving to be groomed, and a Newfoundland died of heat stroke following a grooming at an Ohio store.