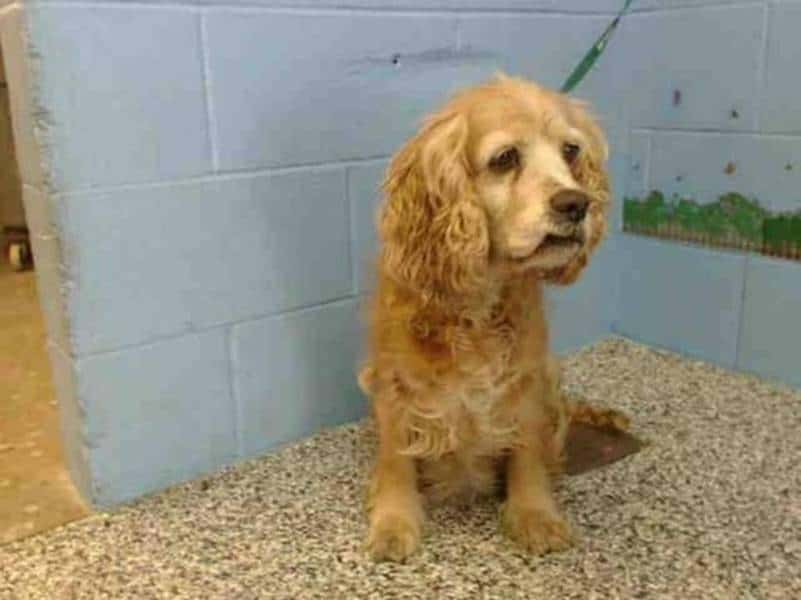 Cookie cried and howled as she watched her family leave the shelter without her. Image via San Bernadino City Shelter.

When a senior Cocker Spaniel and a young black Labrador were found running loose in California, they were captured and brought into the San Bernadino City Shelter as strays.

When the dogs’ family was found, they promptly came to the shelter to collect their pets. But, in a shocking display of betrayal, the family collected their young black Lab and left Cookie, their senior Cocker Spaniel behind.

Cookie cried and howled as she watched her family, including her canine brother, leave without her.

Cookie’s story quickly spread, gaining attention from dog lovers around the globe, horrified at the heartless treatment from the cruel family that she, nevertheless, loved and longed to be with. But, as it turns out, abandoning her at the shelter may have been the nicest thing the family ever did for her.

She had clearly not been well cared for. She was filthy, showing signs of living her life entirely outside, having been overbred for many years, her body riddled with untreated tumors.

OC Small Paws, a rescue out of Utah, stepped up to rescue the senior girl, believed to be between 8 and 10 years old.

Because of her age and medical condition that will require ongoing veterinary care, OC Small Paws made the decision to permanently foster Cookie. She will live out the remainder of her life finally knowing what it means to be loved, playing with toys, sleeping in a bed, and being cared for in the way that she deserves. For the first time in her life, she’s being housebroken.

Her foster family says that, despite what she’s endured, Cookie is a very sweet, very loving girl who “eats like a horse!”

The rescue has been inundated with calls, emails, and letters from people interested in helping. The best way to help, they say, is to visit your local shelter and help another dog in need, especially another abandoned senior.

There are millions of dogs in shelters and rescues around the country with stories as heartbreaking as Cookie’s. If the thousands of people that showed an interest in Cookie simply redirected that interest toward another senior, the impact could be enormous.