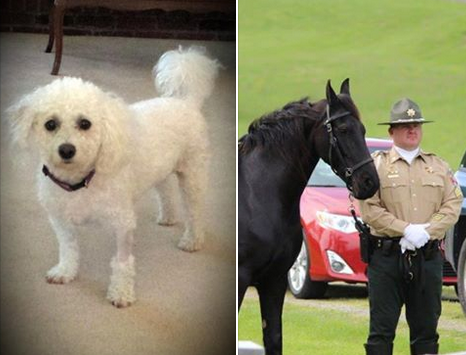 A Rutherford County, Tennessee Sheriff’s deputy is being hailed a hero after giving life-saving mouth-to-snout resuscitation to an unresponsive dog last Wednesday.

When Timothy and Pam Curry’s Murfreesboro home began filling with smoke, they were forced outside, while their beloved dog, Abby, a Bichon Frise, was trapped inside her kennel in the garage. When deputies arrived, the family asked Mounted Patrol Sergeant Jon Levi to rescue their dog.

A video camera in the garage showed Sgt. Levi going inside to rescue Abby, who was unresponsive in her kennel.

“The dog was seizing and couldn’t breathe,” Sgt. Levi said in a statement from the Rutherford County Sheriffs Office. “I grabbed the kennel and snatched the dog out of it. The dog was gasping. I grabbed the muzzle and gave breaths.

Also on the scene were Sgt. Pedigo and Deputy Nick Coble who quickly put water on Abby to cool her down.

“I was just glad I was there at the right time at the right place,” Sgt. Levi said. “I would want somebody to do the same for me. I’m sure the dog is part of their family. I’m just glad it worked.”

The Curry’s rushed Abby to a veterinarian for treatment. But, if it weren’t for Sgt. Levi’s quick thinking and action, she would not have survived.

“Sgt. Levi has a great love for animals and he showed that by going above and beyond to save Abby,” Sheriff Arnold said.

Sgt. Levi will receive a letter of commendation for saving Abby.