A Cherokee County, Georgia police K-9 was found dead in a patrol car on June 10 after her handler, Cherokee County Lt. Dan Peabody, a school resource officer, left the dog alone in the vehicle for several hours while temperatures outside reached into the low 90’s. A necropsy confirmed that Inca died as a result of heat stroke.

Inca’s death prompted a standard police investigation which revealed this wasn’t the first time a police dog had died in Peabody’s care. 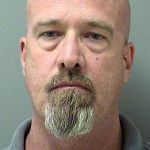 Before being partnered with Inca, Lt. Peabody was partnered with another police K-9, a yellow Lab named Dale. Dale worked alongside his handler from 2007 until 2012 when he retired. After his retirement, the K9 was turned over to Lt. Peabody where he was to live out the remainder of his life as a beloved family pet. Shortly after retiring from K-9 duties, however, Dale was dead. Peabody reported that Dale had died accidentally after he choked on a toy and passed away in the home.

But, while conducting a search warrant of the Peabody home and property after Inca’s death, investigators found remains believed to be those of Dale buried on the property. A necropsy revealed the dog had not died from choking on a toy, but had instead been shot and killed.

Cherokee County Chief Marshal Ron Hunton said the police investigation showed evidence that Dale was shot and killed by Peabody at his Paulding County home shortly after the dog retired from service.

But, there is a very strong possibility more charges will be filed as the investigation continues.

According to Fox 5 Atlanta, a third set of animal remains were found at a home where Peabody lived about a year ago. While not formally identified, police are confident that the third set of remains are those of yet another dead dog. A forensic veterinarian is currently investigating the breed and cause of death.

As if this weren’t enough, Peabody’s wife, Tyler Verlander-Peabody, is accused of operating an illegal dog kennel and training facility out of their shared home. A spokesperson for the Cherokee County Marshall’s Office told 11 Alive, “She did not have a business license, nor was the home zoned or permitted for this type of use. There were no indications or reasons to believe that any animals were in danger or harmed while in her care.”

Yesterday, Judge Mark Anderson read a list of special restrictions to which Peabody would have to adhere once released on bond. Those include not having any contact with animals, not possessing any weapons, and staying away from witnesses in the case. Peabody’s bond was set at $22,400.

This is a developing story and will be updated as new information is released.