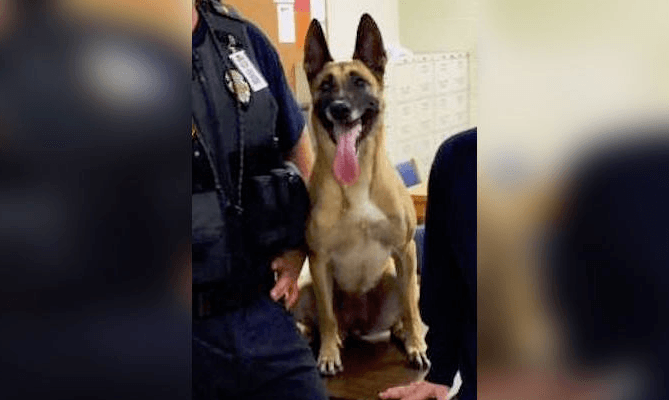 A Cherokee County, Georgia police K-9 was found dead in a patrol car Friday evening after being left alone in the vehicle for several hours while temperatures outside reached into the low 90’s.

Inca, a 4-year old Belgian Malinois was partnered with Cherokee County Lt. Dan Peabody, a school resource officer. Together, the pair worked at area schools conducting sweeps of vehicles, lockers, and classrooms to deter the possession, use, and sale of illegal substances on school property.

On Friday afternoon, about 4:15pm, investigators say Peabody drove home with Inca in the back of the patrol car. Normally, Peabody drives a specially outfitted K9 patrol car with a kennel and safety features to prevent a tragedy, but he’d lent his K9 vehicle to another officer whose vehicle was out of service.

When he arrived home, he parked the car, turned off the engine and air conditioning, and went inside to “deal with another dog.” Around 7pm, Peabody remembered Inca was still in the parked car.

Inca was already dead, presumably from heat exhaustion, by the time she was found.

Inca’s body was sent to the University of Georgia for a necropsy. Lt. Peabody was placed on administrative leave while an investigation into the dog’s death continues. If and when he returns to work, he will not be working with another canine partner. Officials report that Peabody was so grief stricken after the dog’s death that he was hospitalized Friday evening.

Although an investigation is ongoing, charges are possible in Inca’s death.

The CCSD family is mourning the tragic loss of K9 police dog, Inca. She served her community well and was loved by many, especially our students who met her through safety presentations.

Lt. Dan Peabody, who has served with the CCSD School Police Department since 2000, was immediately assigned to administrative duties only and will not be working with a canine partner. Lt. Peabody, a certified K9 handler, raised 4-year-old Inca from a puppy and trained her to serve with him, to track and to detect narcotics.

In addition to the Marshal’s Office investigation, the CCSD is conducting an administrative inquiry and will be reviewing the K9 unit’s practices.