A Salisbury, North Carolina woman has been arrested and charged with cruelty to animals after taping her dog’s mouth shut with duct tape and posting photos of the cruel act on Facebook with the caption, “ha ha.” 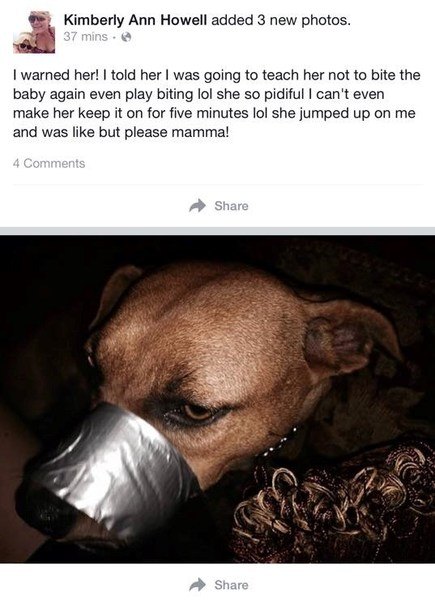 Kimberly Ann Howell, 25, is now out on $3,000 bond for cruelty to animals and failure to appear on outstanding traffic charges after a concerned animal lover saw a photo that she’d posted to Facebook (now removed from the social media site) showing her dog, Leah, a mixed-breed pup with her muzzle wrapped in duct tape. The witness took a screen shot of the post and sent it to the Rowan Sheriff’s Office who began an investigation.

Howell told investigators that she did it because her dog was barking, but WBTV obtained a screenshot of the original post with the photos.

“I warned her,” Howell wrote with the photos. “I told her I was going to teach her not to bite the baby again even play biting.”

Howell maintains that the tape was removed immediately after taking the photos and that she meant it as a harmless joke.

She voiced her grievances over the reaction to her photos on Facebook, saying:

“Wow ok maybe I should of said I was joking when posting that. But honestly though people would know better anyone who spend (sic) a week at my house would see how spoiled and loved my dog is. Anyways guess I really didn’t think through but anyone who knows me knows when I got Leah she [was] skin and bones how (sic) that animal abusee (sic).”

Howell’s boyfriend, John, told WBTV, “The dog is in perfect health, I mean there’s nothing, as you can see she’s far from abused, I’m an avid animal lover and I’ve had 10-12 rescue dogs over the last couple years. There was a lot of backlash out of this, people took it out of context, I mean it was a bad decision on her part, she shouldn’t have posted it, the tape wasn’t on the dog longer than two minutes, it shouldn’t have been done it was just a bad judgment.”