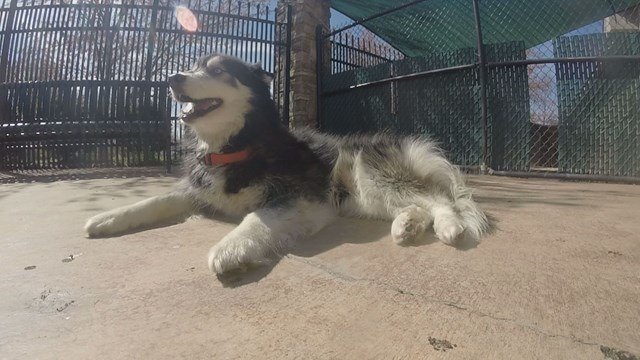 Seven years after disappearing, Koda is finally back home with his family. Image via Young-Williams Animal Center.

A Mississippi family’s dog, then a 1-year old Siberian Husky named Koda, went missing in 2010. Now, 7-years later, Koda is back home with the family that had given up on ever seeing their boy again.

When Koda disappeared from their home, the family searched around their community with no luck. Eventually, they gave up looking for him.

“We didn’t think we’d get him back,” owner Jeremy Huff said. That all changed last week when Young-Williams Animal Center in Knoxville, Tennessee contacted him with the shocking news that they had Koda in their care.

“When all of our animals come in, we scan them first for a microchip,” said Dr. Jen Armstrong, who treated Koda at the center. “They did find one microchip and called and confirmed the owner surrender on that. When he came through for his medical exam, we thought he was a little painful on his back so we wanted to take x-rays of him. We found a second microchip in him. It had migrated down low on his arm.”

That second microchip led them back to Huff, 400 miles away in Union, Mississippi.

“In 2009, I had never really heard about microchipping. The people I got him from kind of informed me about it and how it worked and I said, ‘yeah, put it in him,'” Huff said.

Now, reunited with his old pal, he’s glad he did. And, Koda’s story is proof that microchips work to reunite lost dogs with their families.

“For people missing pets, don’t give up,” Huff said,  “Seven years is a long time, but here we are. We’re getting him back.”