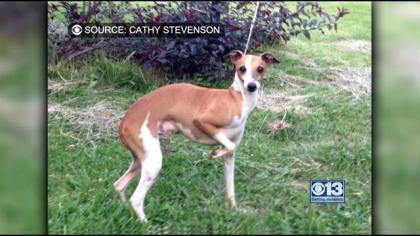 Five days ago, Jutta Kulic arranged for a new home for the pets of a dear friend that recently passed from cancer. One of those beloved pets was Larry, a 2-year old Italian Greyhound.

From her home in San Francisco, Kulic found a new home for Larry with a family in Canada. She arranged for the young dog to fly to his new home on Air Canada Airlines. After making all the preparations, zip-tying his crate several times to ensure his safety, and instructing the airline to absolutely not let him out of his crate unless he was in an enclosed room, Larry was off to his final destination – or so she thought.

Larry’s original flight was cancelled and the dog was transferred to a later flight the same day.

That’s when Kulic got the call from Air Canada.

“They called me at about 6:30, and told me one of their employees had decided to walk the dog,” Kulic told Sacramento’s CBS13 News. When airline workers opened his crate, Larry ran away. The airline told CBS13 that a team has been searching for the dog for five days.

…we wanted answers about what went wrong—what procedures might not have been followed, and what they’re doing to make sure this doesn’t happen to anyone else’s pet.

Instead of answers, we got this email:

“I think I would just ignore, it is local news doing a story on a lost dog. Their entire government is shut down and about to default and this is how the US media spends its time.”

The email message above from Air Canada spokesman Peter Fitzpatrick appears to be intended for a coworker.

Not surprising that the same airline responsible for losing a dog would also show such lack of compassion toward the dog’s owner, and lack of competence in dealing with the media.

Any readers in and around the San Francisco area, please share and keep an eye out for Larry. This poor dog has already lost the only dog parent he’s ever known, and now he’s lost in a big city.