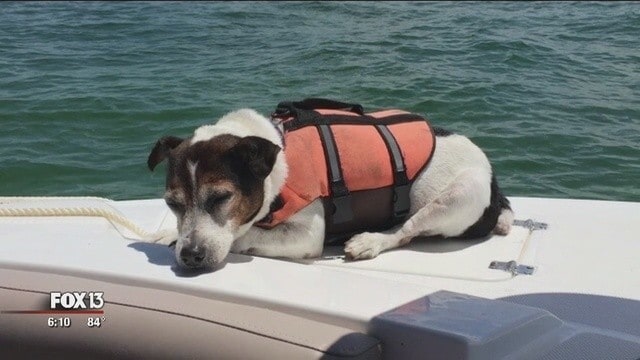 Thanks to a lot of luck, an observant boater, and a tiny little life vest, a Jack Russell terrier lost at sea for more than three hours is finally at home with his family.

Thankfully, Jagermeister was wearing his life vest when his owner took him out boating in the Gulf of Mexico. About 5 miles offshore, his owner went down into the bilge to check something and when he came back up, his four-legged best friend was gone. After an exhaustive search that turned up nothing, Jagermeister’s heartbroken, devastated owners called the Coast Guard in tears.

He said, ‘I had given up. I had searched as long as I could and we just couldn’t see him, and we just thought we lost him.’

Three hours after making that heartbroken call to the Coast Guard, two couples celebrating a birthday on their own boat spotted something strange in the water about 10-feet from the boat.

“I thought it was a buoy and I said, ‘Oh my gosh, there’s something moving,'” Bruce Knecht recalled to Fox13.

It was a small Jack Russell terrier, bobbing in the water, wearing a tiny life vest.

The boaters moved close enough to pull Jagermeister to safety and called the Coast Guard where they learned he’d been lost at sea for more than three hours.

The headed straight for the nearest Coast Guard station and arrived just as Jagermeister’s owner, in tears and relieved, did.

All agree that without that life vest, Jagermeister would not have survived the ordeal.