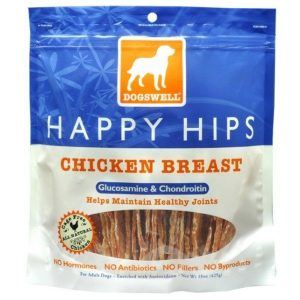 Despite efforts by dog owners around the country to stop the import of all chicken jerky treats imported from China, a few companies have held firm that their products were completely safe and did not include trace amounts of unapproved antibiotics responsible for the massive chicken jerky recalls of 2012.

One of those brands was Dogswell…

The recall was announced in a letter to consumers at the Dogswell website:

During routine testing of our products, the New York State Department of Agriculture & Markets (NYSDAM) discovered that a sample of our Dogswell Happy Hips Chicken Breast Jerky contained trace amounts of an antibiotic residue that has not been approved for use in the United States. It is important to note that this antibiotic is accepted for use in other countries (including the European Union), and there is no evidence that products containing trace amounts of this antibiotic pose a health risk for pets or humans. Since we were notified by the NYSDAM the week of July 22nd, we have made the decision to voluntarily withdraw Chicken Breast and Duck Breast jerky under the Breathies, Happy Heart, Happy Hips, Mellow Mut, Shape Up, Veggie Life, Vitality, and Vitakitty brands that are labeled with a “Best Before” date of January 28th, 2015 or any earlier date. The vast majority of these products were distributed before March 1st of this year. No other products are affected.

The following Dogswell and Catswell brand chicken and duck jerky products, with a “Best Before” date of January 28th, 2015 have been recalled:

If you have a package of any product involved in the recall, discontinue feeding immediately and call Dogswell at 1-888-559-8833 for a full refund.

Then, until Chinese sourcing and manufacturing processes improve, choose only dog food and treats that are not imported from China!