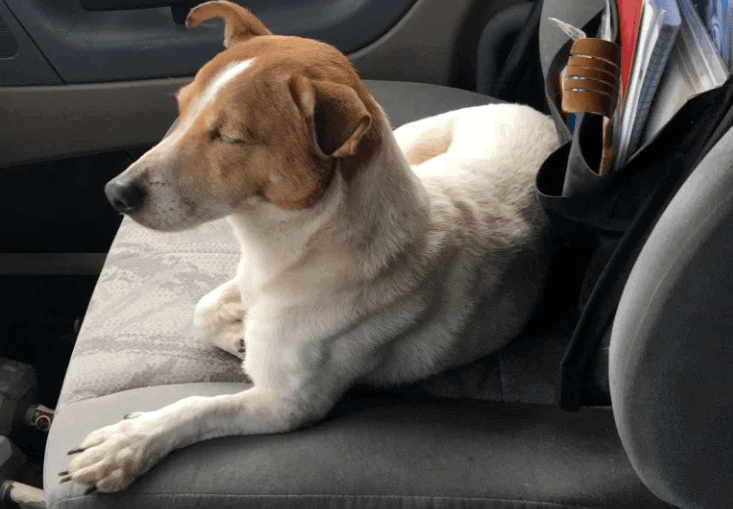 An Ohio truck driver passing through Florida stopped to rescue a stray dog alongside the highway and ended up saving an unlikely pair of animal companions!

When long-haul trucker Dan O’Grady spotted a lost dog along the highway in Jacksonville, Florida, the kind-hearted animal lover couldn’t just keep driving. He pulled his semi-truck to the side of the road and went to help the Jack Russell terrier – but every time he got close, the little dog would bark and run away.

It quickly became clear the dog was trying to lead O’Grady to something. So, naturally, he followed. The determined stray dog led O’Grady to a wooded area where, hiding under a bush, he found an injured domestic white rabbit. 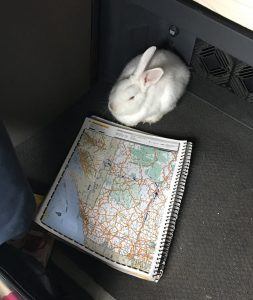 Interstate the Rabbit. Image via Humane Society of Summit County/Facebook.

He picked up the tiny bunny and headed back to his truck with the Jack Russell following closely behind. The trio loaded up into the truck and headed toward the nearest animal shelter. Along the way, he named his new furred friend: Highway the dog and Interstate the rabbit, and fed the hungry duo (sandwich meat for the dog and a salad from a rest stop for the rabbit).

Although the Florida animal shelter was happy to take Highway, they told O’Grady they couldn’t help with the rabbit. Remembering that the Humane Society of Summit County back in his home town of Akron, Ohio had rabbits available for adoption, O’Grady made a quick stop at the nearest pet supply store for a crate, bedding, food and supplies, and hit the road for the long trip back home with Interstate the rabbit along for the ride.

“Who knows how long he and Highway had survived on their own in those woods. And what a lucky rabbit that Highway refused to abandon him when help finally arrived,” the Humane Society said in a news release.

When the Humane Society of Summit County took custody of Interstate, he was bony, malnourished and only weighed 3 pounds. Now, the rabbit is healthy and available for adoption.

“Dan O’Grady literally went the extra mile to rescue Highway and Interstate. The Humane Society of Summit County depends on good Samaritans like Dan who rescue injured, abused and abandoned animals,” they said.

Highway has since been adopted from an animal shelter in Georgia. But, Interstate the bunny is still looking for a family.