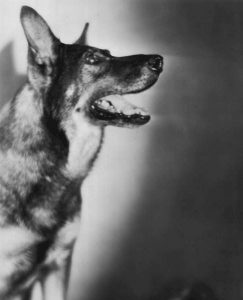 Fun Fact: Rin Tin Tin’s owner and rescuer, Corporal Lee Duncan, taught his dog to perform tricks for fun. Realizing he had a talented pooch, he thought “Rinty” would do well performing in agility and dog shows. While he showed great agility, Rin Tin Tin displayed poor sportsmanship at his first dog show, growling, barking and snapping. The show was not a success. Most devastating, however, on their walk home, a delivery driver tossed a heavy bundle of newspapers from his truck. The bundle landed on Rin Tin Tin, breaking his front leg. He wore a plaster cast for 9 months.

But, that broken leg coincidentally may have led to Rin Tin Tin’s big break! One month after his cast was removed, the German Shepherd had grown strong enough to jump great heights, winning a Los Angeles dog competition with an impressive jump of 11 feet, 9 inches. The winning jump was filmed by a friend of Duncan’s. It was seeing his dog’s impressive jump on film that motivated Duncan to put his pup in the movies.

Now, can you guess who this famous movie dog is?

This goofy, drooly, fun-loving St. Bernard was named after a famous composer. The big furry boy starred in a movie that spawned 7 sequels and an animated television series.

Can you name this famous movie dog? Click NEXT to find out!