If you guessed Beethoven, you’re right! 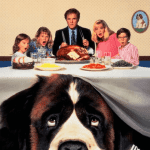 The role of Beethoven in the 1992 film was played by a St. Bernard named Chris. For the role, he was trained by famous animal trainer Karl Lewis Miller, who also trained the animals for movies including Babe and Cujo.

Fun Fact: In addition to Chris, filmmakers used a full-sized mechanical dog for certain scenes as well as a mechanical head for shooting specific facial expressions.

Watch him in action in this famous scene from Beethoven!

Now, can you guess who this famous movie dog is?

Arguably one of the most famous movie dogs of all time, this mixed-breed pup (played by several similarly scruffy mutts over the years) was the star of dozens of movies from his first feature film in 1974 through his most recent in 2004.

Can you name this famous movie dog? Click NEXT to find out!