A day of cruising the Florida coast in search of dolphins became a heroic act of dog rescue for one animal loving boat captain! 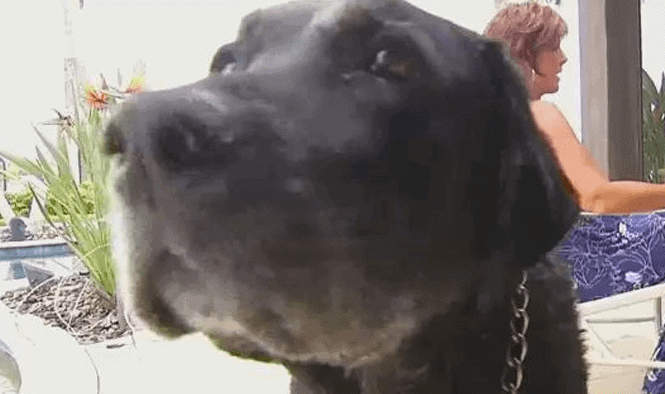 Customers aboard the Dolphin Landings Charter Boat were cruising along the intercoastal waterways off Florida’s St. Pete Beach, hoping to see a few dolphins when a different kind of animal caught their eye.

“…we actually saw some dolphins and we were busy watching the dolphins, and all of a sudden captain Scott said, ‘Susi, do you see what I see?’ And I looked and I said, ‘I see a dog.’ And he says, ‘yep and that dog is in distress,’“ boat captain Susi Herrington told Bay News 9.

Without hesitation, Susi spring into action.

“I lowered myself down and went into the water, swam over to the dog, got a hold of him by his collar, put my arm under his head and lifted his head out of the water and swam with him to a dock, a low dock,” said Herrington.

Herrington somehow managed to pull the large dog onto the dock where, after swimming for an unknown length of time, he collapsed from exhaustion.

The dolphin cruise captain stayed with the dog until, a few minutes later, he stood up and shook off.

Knowing he must live nearby, Susi followed the dog right to a nearby home.

“I knocked on the door, and that’s when I asked the lady, ‘Is this your dog?’ and she was just in tears — literally tears,” Herrington said.

The dog turned out to be 12-year old Sam, a black Lab belonging to St. Pete resident Mary Doherty who said Sam has never gone into the water before, not even the family’s pool. She thinks the senior dog, who suffers from cataracts, must have fallen over the seawall and into the water when she wasn’t watching.

Doherty says she’s forever indebted to Herrington and the dolphin cruise crew for their part in saving her beloved dog. She also plans to keep a closer watch on Sam from now on.

As for being called a hero, Herrington says, “I was just doing my job. Just doing what I’ve been trained to do all these years of working on boats.”